The Future of the NYC Family Court 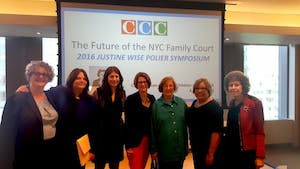 Our bi-annual Justine Wise Polier Symposium honored the legacy of Justice Polier, one of CCC’s founders, by focusing on the New York City Family Court’s strategic plan and new initiatives underway. With nine new Judges in NYC, which CCC helped to lead the advocacy effort for, the City’s Family Courts were poised to think strategically about how to maximize the benefits of the judicial resources and help the court to fulfill its mission “to protect the rights of the families and children by ensuring the just and timely resolution of all matters brought before the court.”

We believe that learning more about the court’s strategic plan and initiatives underway were a perfect way to honor Judge Polier. Justine Wise Polier was the first female Judge in the State of New York and was commonly referred to as a “voice of conscience” due to her frequent outspokenness and action on controversial social issues. Judge Polier fought against racial and economic discrimination both in and out of the courtroom. She believed in using the law as an agent of social change and popularized the notion of the “best interest of the child.”

Judge Jeanette Ruiz, the Administrative Judge of the NYC Family Court, was the Keynote Speaker at the Symposium. Her remarks laid out the goals, vision and deliverables in the strategic plan.  “The convergence of the nine new judges with supporting court personnel along with all of these other factors created a unique opportunity to take a deeper, more critical look at ourselves and our beloved court in order to craft strategies that can achieve the kind of improvement Judge Polier might envision if she were with us today.”

At the conclusion of Judge Ruiz’s remarks, Judge Carol Sherman, Supervising Judge from Bronx Family Court, spoke about her experiences appearing in front of Judge Polier, including on the infamous Shirley Wilder case. This groundbreaking case eventually led to dramatic reforms in the child welfare system. The Judge Amanda White, the Supervising Judge in Brooklyn Family Court, spoke about the court’s efforts to better coordinate and meet the needs of “crossover youth,” meaning youth with cases in both the child welfare and juvenile justice systems. Finally, Judge Sarah Cooper from Bronx Family Court spoke about the pilot program in her courtroom aimed at better meeting the needs of infants.

The program concluded with the panelists thinking about the Family Court of the future. This future system included a digital courtroom, family court apps, the ability to access services for families more easily, and a system that was more collaborative.

CCC is grateful to Judge Ruiz, Judge Sherman, Judge Cooper and Judge White for sharing their insights and to Skadden, Arps, Slate, Meagher & Flom for providing us with the wonderful space to hold our event.