What the American Health Care Act means for NYC children 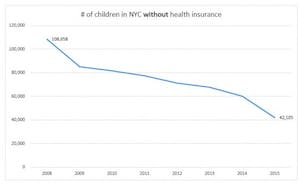 The American Health Care Act that the House of Representatives unveiled last week could have negative implications for millions of Americans, including children. We know that health coverage is essential for New York’s City’s 1.8 million children. We are committed to raising our voices on their behalf to make sure their coverage is secure.

New York City has achieved near-universal health care coverage for children – in 2015, 97.7 percent of children in the five boroughs were insured (you can explore the data on key health indicators by community district on Keeping Track Online). That coverage rate is thanks to two key health insurance programs for low and moderate-income children in New York State: Medicaid and the Children’s Health Insurance Program, or Child Health Plus as it’s known in New York.

New York’s success at insuring children predated the Affordable Care Act. In 2008, 5.7 percent of city kids were uninsured, and as you can see in the above graph, that rate has been in decline ever since. But the proposed replacement of the Affordable Care Act does not guarantee that the city and state will be able to maintain these child health insurance numbers.

This is in part because of proposed changes to the way the federal government would fund Medicaid, the program that currently extends health insurance to people with disabilities and individuals and families making 138 percent or less of the federal poverty line. More than half of all New York City children – 55%, or nearly 990,000 — are enrolled in Medicaid.

According to the Center on Budget and Policy Priorities, the House’s proposed legislation implements a per-capita cap on the money it will provide to states for each of its residents enrolled in Medicaid. That funding is not guaranteed to cover all of each beneficiary’s needs, and states would be responsible for making up the difference.

The caps also do not factor in cost increases in the healthcare system over time, and would not provide additional funding for beneficiaries as they age, or if a state suffers an unexpected natural disaster or disease outbreak that raises medical costs.

Should this proposal become law, New York City and State would need to either come up with additional funding for Medicaid or make cuts to the healthcare system or other systems. The proposal would also likely impact Child Health Plus, as CHP extends coverage to children in working families who make too much to qualify for Medicaid but not enough to afford private coverage. If New York has a Medicaid shortfall, a domino effect could well threaten Child Health Plus, and the nearly 120,000 New York City children enrolled in it.

Instead of working to ensure the approximately 42,000 NYC kids currently without health insurance can access it, New York City now faces the very real possibility of being faced with devastating cuts and trade-offs that will harm children and families.

The American Health Care Act could be on the House floor for a vote as early as March 23rd. You can take a moment before then to call your Representative and ask them to vote no on the bill. If your representative has already expressed opposition to the bill, call and thank them for standing up for vulnerable children and families.

Quality healthcare is a basic human right. It’s up to us to make sure our children get what they deserve.