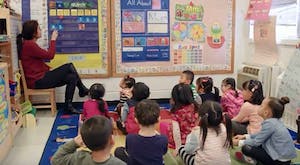 A new report from UC Berkeley calls attention to the low and inequitable wages earned by professionals in the early childhood education system. The report, At the Wage Floor: Covering Homecare and Early Care and Education Workers in the New Generation of Minimum Wage Laws, elevates the salary issues experienced in the early education workforce (as well as in Home Care) in New York City and nationwide as a key issue that must be addressed as states and cities move forward with increases to the minimum wage.

According to the report, because of the high cost of child care and inadequacy of public funding, only a fraction of the need for early childhood education services are met across the country. To maximize the number of children served in subsidized care, the government sets a low bar for reimbursement rates to child care providers leaving limited funding to pay staff living wages.

The report makes the case for public investments to provide living wages to early childhood educators in order to promote equity and economic mobility for the workforce, as well as expansion of quality programming to meet the unmet needs of children and families.

However, CCC and our partners in the Campaign for Children are deeply concerned about the salary disparities in the early childhood workforce and the resulting destabilization experienced at community-based programs which make up a critical majority of the system.

CCC’s recent video created on behalf of the Campaign for Children illustrates how these challenges are experienced by educators in New York City, and in turn the programs and families they serve.

Like CCC, the researchers at UC Berkeley believe that New York City’s Pre-k for All initiative is a noteworthy example of a local effort to expand publicly subsidized ECE programs. However, they also raise the salary disparities experienced between community based organizations and their counterparts at DOE schools as a key obstacle for the City to address.

“The NYC example further illustrates the complexity and disparities that exist within the current ECE system, and highlights the importance of coordinating policy changes with broader system reforms,” the report states. “Much more will need to be done in order to address these problems across the NYC child care system, but city leaders have the opportunity to employ lessons learned and address these challenges as they seek to expand and strengthen ECE services.”

The report outlines several principles for states and cities to adopt in order to address the unique challenges of raising wages for home care and child care workers and ultimately address growing income inequality across sectors. Among them, the report calls for child care workers to be included in minimum wage laws, regardless of funding streams, and advancing local policies that support a wage scale that incentivizes the educational attainment and ongoing learning needed to improve and sustain quality programs. The report also advocates for reforms to child care subsidy eligibility rules and parent fee schedules to align with wage level increases and developing methods to project the necessary funds to address equity in earnings across the workforce.

In the long-term, the report advances recommendations to align funding streams so that early education programs are financed in the same way that K-12 education is funded. This would to ensure that every child is guaranteed access to services, regardless of the family’s ability to pay, and also allow for state and local governments to ensure that fair and equitable wages are built into the early childhood education system for all professionals working to provide young children with a solid foundation for success in school and beyond.

We believe the City is well-positioned to be a national leader, as a champion for the public investments in the early childhood education system that this report calls for. The first step in accomplishing this is through the achievement of salary parity for all early childhood educators in New York City.