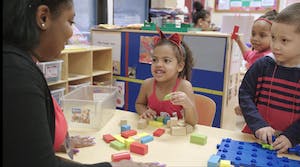 CCC and the Campaign for Children have released a new PSA to call attention to the striking inequities experienced by educators in New York City’s early childhood education system. The PSA titled, “Salary Disparities in NYC’s Early Childhood Workforce,” features teachers and program directors at community-based organizations throughout the city speaking about how these disparities impact their lives and the experiences of children and families in their programs.

“It’s very discouraging for the teachers in these organizations who have worked just as hard, who have the years of experience, and it’s very discouraging to have the thought of raising a family in New York City with as little pay as they’re receiving,” said Brittney, a director at a program in East Harlem, in this video about these troubling pay inequities.

A certified early education teacher at a community-based organization with a Master’s degree and eight years of experience earns $48,920. That’s approximately $30,000 less than an early education teacher with the same level of education and experience at a DOE school. This inequity threatens the stability of programs that have decades-long histories providing high quality care to young children in communities across the city, as experienced teachers leave community-based programs for higher paying jobs at DOE schools. The continued failure by the city to address these disparities also jeopardize the capacity of the city administration to continue to build on its successful Pre-K for All initiative with 3-K.

“Without the CBOs the Mayor could not have done the early childhood expansion with UPK and now with 3-K,” said Angalie, a director at a program in Bedford Stuyvesant. “Look at the quality of service that’s being offered to children and families in CBOs.”

ACT NOW: Join the Campaign for Children in speaking out about these salary disparities by sharing this video on Facebook and Twitter.

The video is the first in a two-part series titled “In Their Own Words” where teachers, parents, and youth were interviewed to shed light on some of the Campaign for Children’s current and most pressing priorities, and link New Yorkers with opportunities to get involved. Learn more here.