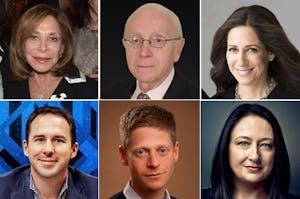 For Elaine and Mark Kessel and their children, involvement with CCC is a family affair.

Though they are bi-coastal and quite busy, each member of the family has a way to connect with CCC. Elaine, the family matriarch and a psychotherapist, is a board member and heavily involved in the day-to-day at CCC, serving on the Nominating, Development, and Program Committees.

Her husband Mark serves as the Head of the Healthcare Group and Of Counsel in the Capital Markets practice at the law firm Shearman & Sterling. After seeing how much Elaine learned in 2008 when she took CCC’s Community Leadership Course (CLC), a comprehensive introduction to child policy and advocacy in New York City, he began to refer colleagues from the firm he thought would be impacted by the course as well. Mark is well-versed in the issues CCC advocates on and comes consistently to CCC’s events – even when Elaine is unavailable.

The couple’s daughter Greer Hendricks, a New York Times bestselling author, took the CLC in 2015 at the urging of her mom and found it so eye-opening and instructive that she has helped fill the course with like-minded peers ever since. Her husband John, the CEO & Founder of the marketing company ERGO Interactive, creates top-of-the-line digital presentations for the MoMA benefit every year, where he and his team push CCC to tell its story in creative new ways.

“CCC really makes an impact on individual lives,” John says. “We think it’s important to showcase that impact and tell those stories.”

Though they now live in California, Elaine and Mark’s son Robert Kessel and his wife Julie Fontaine continue to support CCC events and programming and have fond memories of CCC from when they lived on the East Coast.

“I remember Elaine traveling to Albany to advocate for policy, and I was extremely proud of her,” Julie says.

And of course, there are the bets.

Whenever the family gets together and Greer and Robert have a disagreement, they make a bet – and the loser donates money to CCC.

That dedication to CCC is why the family will be this year’s Special Honorees at our CCC Celebrates at MoMA event on April 18. It is also indicative of the passion for children’s causes and giving back each of them embodies, which is evident to everyone who knows them.

“I can think of no finer honorees than Mark and Elaine, both of whom I have the highest admiration for,” one board member wrote after learning who this year’s MoMA honorees would be. “They are extraordinary advocates, philanthropists and human beings whom I have been so privileged to know over the years.”

Elaine and Mark cultivated those values in their children from an early age as well.

“Ever since working as a teacher of inner city kids from San Francisco in a summer program the first three years of my high school years, I have been passionate about helping underserved kids have the same access in education and resources that I was fortunate to be given as a kid–and now that my kids receive,” says Robert, an executive at Participant Media, a media company dedicated to entertainment that inspires social change, and an executive producer on the recent hit film “Wonder.” He is also a board member at Students Run LA, an organization that leverages training for and running the Los Angeles Marathon to mentor and develop at-risk students year-round.

Julie, the Vice President of Original Film Publicity at Netflix, shares Robert’s commitment to education and expanding opportunity for underserved students. “I come from a family of public school educators,” she says, “and I’m very passionate about the importance of quality education for all children.”

Julie also served on the board of the New York Women’s Foundation for six years and supports Miry’s List, a local organization that helps refugee families relocating to California.

The New York-based Kessels and Hendricks are key advocates for the issues CCC advances. Every year, Greer and Elaine spend CCC’s Advocacy Day together in Albany meeting with elected officials about budget priorities for children and families.

“CCC is such a huge part of my mom’s life, and I love that I get to be a part of it,” Greer says. “It’s a really special way for us to connect, and I know that she has gotten back ten times what she has given.”

Her husband agrees. “Helping is so often reduced to check writing,” John says. “Our family is really about not just writing checks but also being involved. It’s cool to have that involvement transcend generations. CCC touches our entire family.”

Mark, too, feels the impact his family’s involvement with CCC has had on all of them. Whenever someone he’s referred to the CLC course wraps up the first day, he and Elaine take the person out to dinner.

“They’re always dying to talk about the SPENT exercise they do on the first day,” he says, referring to a poverty simulation activity participants do to help them understand the daily realities of poverty. “It really makes them think.”

Elaine and Mark relish those conversations, as they have both spent decades fighting for disadvantaged children and families. Elaine spent her career working with battered and abused women and providing mental health support to survivors of sexual violence. Mark founded Symphony Capital, a private equity firm dedicated to helping foster biopharma innovation, and holds several directorships and advisory roles at organizations focused on improving healthcare access and fighting and preventing infectious diseases, particularly in the third world.

“You get to a place in your life where you just have to give back,” he says.

Elaine echoes that sentiment. “Even if you make one small difference,” she says, “It all matters.”