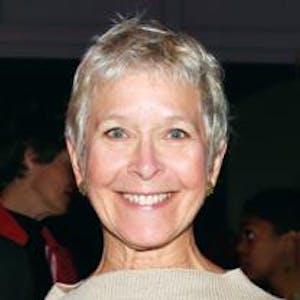 More than two decades ago, this year’s Eleanor Roosevelt Award recipient Judy Garson was looking for ways to turn her training as a lawyer and passion for public service into a meaningful volunteer opportunity. Over lunch, she told a friend what she ideally wanted. Her friend immediately told her to call CCC.

Judy dialed the number, and on the other end of the line was Nancy Solomon, a longtime CCC board member (and, coincidentally, last year’s recipient of the Eleanor Roosevelt Award). Nancy started telling Judy about the work CCC does, and mentioned that Eleanor Roosevelt was one of the organization’s founders.

“As soon as she said Eleanor Roosevelt’s name, she had me,” Judy said. “To me, when I was a young person, Eleanor Roosevelt was tenacious, fiercely independent, intelligent, strategic, willing to speak truth to power. How could she not have been my hero?”

It is fitting, then, that all these years later Judy will accept the 2018 Eleanor Roosevelt Award at CCC’s Celebration Breakfast. The award recognizes Judy’s leadership at CCC, fierce dedication to child advocacy and support of vulnerable children and families over decades.

Her involvement with CCC began shortly after that initial phone call with Nancy Solomon, when Judy immersed herself in juvenile justice initiatives and signed up for the Community Leadership Course. From the CLC, she went on to become a volunteer, board member, President, Chair, and, today, a Vice-President of CCC.  She was so energized by the work that it prompted her husband, Steven Rappaport, to take the CLC years after she did.

“For him, the course was eye-opening and it helped him understand and articulate the work that CCC does,” she said.

Now a site leader for the CLC, Judy says one of her favorite things is when staff members at other organizations tell her how much they appreciate CCC’s advocacy. “Other organizations usually don’t have the time or resources to do the advocacy and data gathering on their own,” she said. “Visiting sites and talking to people there have made me realize how important CCC’s work is and what a difference it makes to the communities we serve.”

CCC has also given Judy a network of impressive, accomplished advocates with whom she has done it all: assisted in participatory research, educated community groups, rallied and called and written to pass legislation, met with elected officials, and attended policy briefings. She said CCC has struck a great balance between fostering a social sense of community and providing volunteers with meaningful opportunities to make a difference, and has helped her make lifelong friends along the way.

“Every time I walk into a room full of CCC people, there is such genuine warmth and passion,” she said.

Judy has supported New York children and families outside of her involvement with CCC as well. She is a champion of the arts, believing that theater has the power to generate empathy and to help people understand perspectives and situations to which they may not have a personal connection.

“The same way the CLC opens up the world to people who travel to new neighborhoods, or who are introduced to dedicated and exceptional direct service providers, the arts are a huge opportunity to expose people to new ideas and points of view and expand their understanding of others,” she said.

She also lends emotional support to women and families who have experienced pregnancy loss through a peer-led project she has been a part of for more than thirty years. “That is another endeavor that has shown me the power of a volunteer to really have an impact on others,” she said.

Though CCC has been such an important part of her life, she hopes to see a day when the organization becomes superfluous. “My hope for the future of New York City is that all the agencies and organizations supporting children are adequately funded and able to coordinate and address children’s needs in a holistic way,” she said. “I hope we get to a place where we can remove all the barriers and meet the basic needs that every family has.”

You can learn more about CCC’s 2018 Celebration Breakfast and buy tickets here.