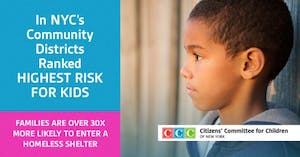 Homelessness in New York City has captured a lot of attention in recent months, and rightly so – more than 62,000 New Yorkers are currently living in Department of Homeless Services (DHS) shelters. But what often gets overlooked in the conversation about homeless people is that, as of January 9th, 23,484 of them are children.

Children who are homeless can face a staggering array of challenges that go beyond lacking stable housing. Homeless children are often at increased risk for struggles in health, education, safety and more.

This is clear in our Community Risk Ranking, an annual report on children in all 59 community districts in New York City which ranks well-being across six key domains – economic security, housing, health, education, youth, family and community. Communities that rank high-risk in one domain tend to rank high-risk in several others, multiplying the problems faced by children growing up in those neighborhoods and dramatically increasing their chances of very poor outcomes.

In East Tremont in the Bronx, for example, one in three families is paying more than 50 percent of its income on rent (these families are referred to as rent-burdened), and families are three-and-a-half times more likely to enter the city’s homeless system than families citywide. In this neighborhood, children are not only facing obstacles in terms of housing conditions, but also higher rates of poor outcomes in education, health, and crime, as well as a profound lack of economic security – all of which are proven to have a negative impact on their short- and long-term well-being.

It’s critical that families in these situations receive not only housing supports, but also access to the social safety net programs that help them fill in the gaps to meet their other basic needs, including health care coverage, food supports, and child care.

Without that assistance, rent-burdened families often have to make devastating choices. A family who spends more than half its income on rent may have insufficient remaining resources to  put food on the table or pay for needed child care among other basic necessities; these families often go hungry and struggle to remain connected to the workforce.

A stint in a homeless shelter should never condemn a child to a lifetime of suffering, and families should never have to sacrifice one or more of a child’s basic needs in order to address others. We must resolve to focus in 2017 on the children and their families who lack access to a stable home. We must be ready to fight so that we have more resources to help them with, not less.

Fortunately, we have the information we need to lend our voices to children and families. We must commit to maintaining steady pressure on our federal, state, and city leaders to not only protect the programs and services these children and their families rely upon but expand access to the services that have proven to help them thrive. Some of the solutions we are advocating for include:

To read more on homelessness in the city, check out Jennifer March’s op-ed in the Gotham Gazette.