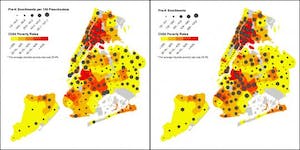 There are nearly 1.8 million children living in New York City and about half a million of them are under the age of five. Nearly 30 percent of all NYC children reside in poverty, and in some communities child poverty rates reach 50 percent or more. We know too that less than one third of the city’s elementary and middle school children are meeting math and reading standards.

For these children and all children, access to high quality early education supports social and emotional growth, promotes school readiness, and provides the foundation for academic success.

CCC and the vast majority of New Yorkers supported Mayor de Blasio’s call for full-day universal pre-kindergarten because high quality early education is a vehicle through which to not only improve child outcomes but to combat inequality in NYC.

When we examine data on full-day pre-k enrollment in the initiative’s first year, we see that the footprint for the city’s Pre-K for All program is large with children benefiting across the five boroughs. Furthermore, contrary to a recent report, Expanding Preschool in New York City – Lifting Poor Children or Middling Families?, which suggests wealthier districts of the city have benefited disproportionately from the city’s pre-kindergarten initiative, our analysis of the data reveals that the majority of pre-k enrollments concentrate in neighborhoods where child poverty rates exceed the citywide average.

As the city’s oldest independent child advocacy organization, CCC would offer that the success of efforts to bring full-day pre-k to all four-year olds in NYC demonstrates just how impactful New Yorkers can be when we and our elected and appointed officials band together around child policy priorities.

CCC looks forward to the second phase of expansion of full-day pre-k and believes that the success of Pre-K for All must be leveraged to inform the expansion of and access to high quality early education services for children ages zero to three.