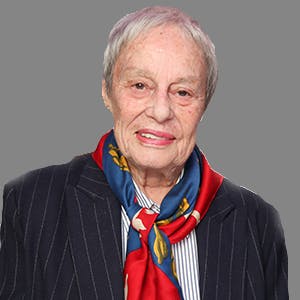 When Frances (Fran) Levenson tells the story of growing up in The Bronx during the Great Depression, she recalls walking down her street and seeing furniture hauled to the curb.

Each pile represented another family evicted from their home.

These images sparked a lifelong interest in housing advocacy in New York City and throughout the country. Her work spans multiple generations, starting in the years immediately following World War II, through the city’s tumultuous 1970s and ‘80s, to her still active involvement, at age 95, with various organizations like Citizens’ Committee for Children of New York.

In the early 1950s through the 1960s, Fran’s tireless and fearless work as the Executive Director of the National Committee Against Discrimination in Housing (NCDH) placed her squarely in the civil rights movement.

March 19, 1956 Frances Levenson calls out the Federal Housing and Home Finance Agency for attempting to evade Brown v Board of Education.
“The movement to use residential containment to enforce school segregation is gaining momentum.” A warning she would later echo while testifying before the U.S. Senate.

Under Fran’s tenure, the NCDH not only got the New York State legislature to consider the first bill in the nation prohibiting housing discrimination; but successfully pushed New York City to become the first city in the country to ban discrimination in private housing. After Fran and the NCDH testified in congress, President John F. Kennedy issued Executive Order 11063, “Equal Opportunity in Housing.” The order prohibited discrimination in the sale, rental, or use of all residential property that was owned, operated, or financed by the federal government. President Kennedy credited the NCDH while signing the order.

Fran’s work at the NCDH gave her the mettle necessary to agitate for change “from within” in her subsequent roles in the City Rent and Rehabilitation Administration, as New York City Deputy Commissioner for Housing, and General Counsel to the City Commission for Human Rights.

Fran has played an outsized role in CCC for nearly half a century, including several years of directing and executing much of CCC’s work in housing and homelessness in a volunteer capacity. This included her steely resolve to hold Mayor Koch accountable for promises made, leading to his historic $4 billion investment in renovating city-owned housing that had been in decay, and building record numbers of new affordable housing units. Koch’s housing policy is arguably his most historic and influential achievement, and while many advocacy groups rallied alongside CCC to put pressure on the Mayor, Fran strategically used the media to uncover and document the unthinkable conditions that many New York City children and families were living under in city-owned housing, putting immense pressure on city leaders to act.

In fact, throughout the second half of the 20th century, Fran (and CCC) played a pivotal role in highlighting the impact of housing discrimination, the lack of affordable housing, and the dire conditions faced by many children and families living in both public and private housing and shelters.

Her brilliance and conviction made her a natural mentor to several CCC staff members who worked in her field and consider themselves exceptionally lucky to have worked with her early in their careers.

“I am very honored by this award, and I thank everyone,” said Fran. “It’s an honor coming from an organization that I have tremendous respect for and that gives me hope for the future.”

Looking back, she sees a lot that has been accomplished in making the lives of New York residents better and more equitable but also recognizes there’s much more to be done.

“We started things rolling but the challenge is to keep things rolling,” she said. “And I think that’s what CCC is doing after all these years — bringing out the data and using the data to bring about change.”