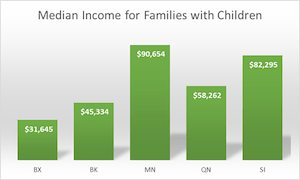 Read our initial reaction to the latest child poverty data released by the census in a recent Op Ed by CCC Executive Director Jennifer March in City Limits.

The new Census data released on September 18 provides some positive news for New York City: the child poverty rate declined slightly leaving approximately 30,000 fewer children living in poverty in 2013 than in 2012. Moreover, the median income for families with children increased for the first time since 2008, showing signs of recovery from the recent economic recession.

While the declining child poverty rate is no doubt positive news, we clearly continue to have our work cut out for us. More children across the city experienced poverty in 2013 than in 2008 before the recession. In addition, despite the year-over-year increase, the median income for families with children was still about $2,000 less than the median income for all households.

There are also stark disparities that persist across New York City communities, as the Bronx continues to experience both the lowest median household income at $33,009, compared to $72,190 in Manhattan, and the highest child poverty rate of the boroughs, with 42% of all Bronx children (149,000 children) living poverty. In some neighborhoods in the South Bronx and Central Brooklyn, more than half of children lived in poverty in 2013.

Research demonstrates that services and supports can both sustain low-income families and help lift them out of poverty, as well as increase the economic stability of communities. The good news is that there are many initiatives underway in New York City to support children, families and communities in this way, including full-day universal pre-kindergarten for four-year-olds and the recent expansion of after-school services and universal school meals for all middle school students. In addition, efforts to increase access to affordable housing and provide families with rent subsidies to assist them in moving out of shelters are positive steps.

We know what works for children and families. It’s critical that we continue to expand on these efforts, and to seize this opportunity to invest in practical solutions that have proven to be effective.

That’s why we hope to see future investments in the early education system in New York City so that we are reaching infants and toddlers long before they start formal schooling. We also hope to see after-school investments expanded for children in elementary and high schools. We must continue to strive to improve take-up rates for school and summer meals and to expand breakfast in the classroom and universal school lunch.

That’s also why we must continue to push for increased investments in asset development supports that help families get banked and benefit from savings opportunities, as well as ensure they benefit from tax relief such as the Earned Income Tax Credit and the Child Care Tax Credit, among others.

In sum, we must leverage recent Census data to inform early and consistent investments in our city’s children. These strategic investments can move us closer to a robust and vibrant future where all children grow into productive adults – promising to not only fuel our city’s economy but contribute to the city’s long term well-being.

We’re getting started on a comprehensive analysis of what this new data tells us about child well-being in New York City and we will be updating Keeping Track Online with information on poverty, income, hunger, health and more. So please continue to check here for updates!