CCC Keeps the Pressure on in Albany 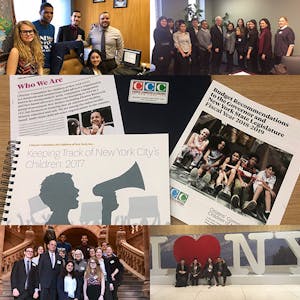 More than 40 volunteers and staff from CCC traveled to Albany yesterday to voice our strong concern about State Budget proposals that would negatively impact children and their families.  These proposals include cuts to child welfare services in New York City, Close to Home juvenile justice placement services in New York City, a failure to fund Raise the Age implementation in New York City, a delay in the expansion of children’s behavioral health services statewide, and a failure to invest in programs that would help reduce homelessness for children and families.

You can download our State Budget Recommendations and learn more about CCC’s priorities for children and families.  Key priorities include:

In addition to yesterday’s Advocacy Day, CCC staff, Board Members, Advocacy Council members, and Youth Action students, have been working alongside our colleagues to make our voices heard in Albany since the proposed budget was released in January.  We have testified at state budget hearings including public protection, education, and human services; participated in and helped to organize several advocacy days in Albany including child welfare, Close to Home, Raise the Age, and Summer Youth Employment; organized press conferences in Albany and New York City; organized a twitter rally; and provided information to the press.

The New York State Budget for the upcoming fiscal year, which starts April 1st, is currently being negotiated so now is the time for you to weigh in.

Check out some of the press coverage in NY1, Politico, and The Daily News.