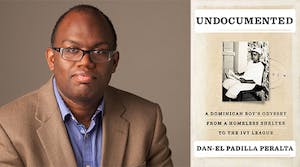 “I live, in part because of the conditioning of my childhood and adolescence, in this state of expectation that something really bad is about to come our way.”

Dr. Dan-el Padilla Peralta, 31, is a classics scholar, immigration reform advocate and author of the memoir, Undocumented: A Dominican Boy’s Odyssey from a Homeless Shelter to the Ivy League. Peralta and his family came to New York from Santo Domingo when he was just four years old, for the end of his mother’s high-risk pregnancy with his younger brother, Yando. After his family’s visa expired, Peralta’s mother risked staying, seeing how Dan-el excelled at school. After years of living in poverty and homelessness, Peralta had attracted the attention of a volunteer at a Bushwick homeless shelter who was struck by his passion for learning. With his help, Peralta was admitted to Collegiate School, continued to Princeton and, in 2006, shortly before his graduation from Princeton, came out as an undocumented student in the Wall Street Journal. He graduated summa cum laude from Princeton and was called “one of the best classicists to emerge in his generation.” He received an MPhil from Oxford, a PhD in Classics from Stanford, and currently teaches at Princeton.

Please note: Everyone at our Breakfast will receive a copy of Peralta’s memoir, Undocumented: A Dominican Boy’s Odyssey from a Homeless Shelter to the Ivy League.