CCC at MoMA: A Record-Breaking Celebration 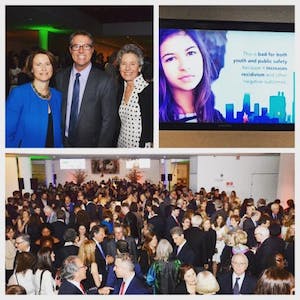 Over 800 guests gathered together for a private evening at The Museum of Modern Art on April 27 to support CCC and honor dedicated child advocates, Brad S. Karp and Chris Stern Hyman.

Brad Karp, Chair of Paul Weiss Rifkind Wharton & Garrison, accepted his award by reminding attendees that “there is no more important cause than protecting the most basic rights for those in our own backyard—individuals who lack advocates, lack resources and lack a voice. CCC does just that—and it focuses its advocacy exclusively on New York City’s most important asset—its children; all 2 million of them.”

Chris Stern Hyman, whose family’s involvement spans three generations at CCC, from our founding in 1944 through today, added that “philanthropy itself is a form of advocacy – at times supporting individuals directly and at other times giving voice to the needs of many who have not been heard. CCC is hard at work every day advocating for a level playing field for all NYC’s children and their right to be healthy, housed, educated and safe.”

Jennifer March, CCC’s Executive Director, made a plea for everyone to remain vigilant in the months ahead on several fronts, including the campaign to raise the age of criminal responsibility in New York State: “New York and North Carolina are the only two states remaining that continue to prosecute any youth 16 and older as an adult. New York’s antiquated law is still in place despite overwhelming research that shows that involving youth in the adult criminal justice system and placing them in adult prisons – produces profoundly poor outcomes for youth and actually jeopardizes public safety.” She urged everyone to take action on this issue and “let our state leaders know that NOW is the time to raise the age.”

The event set a new fundraising record, raising over $1.2 million for CCC’s research, community education and advocacy on behalf of NYC children. CCC owes a great debt of gratitude to the event’s Chairs, major corporate and individual supporters— including our lead sponsor Paul, Weiss, Rifkind, Wharton & Garrison— and the many dedicated Steering and Benefit Committee and Junior Council members who donated their time and effort to our special event.

We thank everyone who joined us to celebrate our honorees and support CCC!

We hope you will continue to stand with us to help improve the well-being of all New York City children, ensuring that every child is healthy, housed, educated and safe: