Students in Temporary Housing and Distance Learning: A Unique Challenge of the City’s COVID-19 Response

When the New York City Department of Education announced it would be moving its 1.1 million students to a remote learning model, we knew it would be an unprecedented task with a unique set of challenges for students, teachers, staff and families. We also knew that some student populations would struggle with the adjustment more than others.

More than 1 in 10 students in NYC schools lacked permanent housing last year. These students already had significant obstacles to educational success, but the move to remote learning has presented a set of new challenges. Students in temporary housing (STH) may lack access to a reliable internet connection, or a personal device to call their own, or both. They are more likely to lack the physical space to learn remotely where they live, especially those who might also have siblings who are remote-learning, and they may not have a caregiver present to help them set up their access, or guide them through the day. For all these reasons the city must immediately focus on supporting these students during this time of transition, and further plan to support them whenever schools are in session again, whether it be this school year, the summer, or next school year.

Students In Temporary Housing By The Numbers

In New York City, there were

children in the NYC school system who were temporarily homeless during the last school year.

Temporarily homeless students are students whose primary nighttime residence is in a shelter, transitional housing, hotel or motel, doubled-up, or unsheltered at any point during the school year.

Of these students, nearly a two-thirds (65%) share their home with other relatives or friends, also known as living doubled up.

of students in temporary housing or 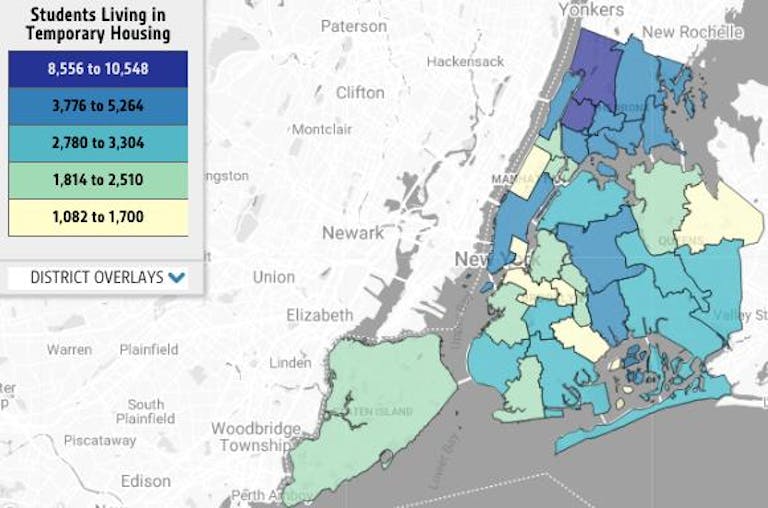 Note: The map does not include students who attend charter schools. Click here to view this map on our online database.

Check Out Our Database >

Housing Insecurity Already Has A Significant Impact On Educational Outcomes

In a traditional learning environment, students in temporary housing struggle to keep up with their peers across several measures of educational outcomes. STH have higher rates of chronic absenteeism and dropout rates, and lower graduation and proficiency rates on state exams.

of students living in the city’s shelters are chronically absent1, compared to 27% across the NYC school system2

of NYC homeless students are proficient on state reading and math exams on average, 20 percentage points lower than their peers who are not homeless.

of homeless students in NYC graduated high school in four years, compared with three-quarters of students who are not homeless.

of homeless students dropout of school. That is more than double the dropout rate (7%) of students who are not homeless.

There’s no way to determine the impact of remote learning on education outcomes at this point, but suffice to say these inequities may only be deepened without action.

What The City Can Do

The Dept. of Education has been distributing remote devices including laptops and iPads to students who need them, including students in shelters. As of Wednesday April 1, the DOE had distributed internet-connected iPads to 12,000 students in city shelters, but remote learning has been ongoing since March 23rd. This distribution needs to be continued and expedited as much as possible, to ensure these students don’t fall behind through no fault of their own.

But simply having a device and internet does not help students who may lack the space and guidance that propels successful remote engagement. That’s why CCC has joined with other advocates, the Comptroller, and members of the City Council to call on the DOE to allow students in temporary housing access to the city’s Regional Enrichment Centers. These centers, created to serve children of essential workers during the crisis, thus far have been under-enrolled but could provide needy students with better-suited environments to learn remotely.

As we emerge from this with a host of new challenges to the social, economic, health and educational well-being of our children and families, we must continue to support populations who stand to lose the most during this crisis, like students in temporary housing.