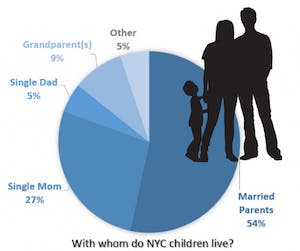 The latest data released by the U.S. Census Bureau in late September reveal that signs of economic recovery seen in 2013 seem to have lost momentum in 2014.

CCC has conducted a thorough analysis of the data, which you can review in our annual Snapshot of NYC Children and Families in 2014.

The cost of living in NYC continued to increase: Median monthly rent has increased since the start of the economic recession by 11.9%, from $1,036 in 2008 to $1,160 in 2014. Rental costs consumed about one third of the average household’s income last year.

Unemployment rates for New Yorkers ages 20 and up approached pre-recession levels: One positive economic trend, as pictured in the chart below, was the decline in unemployment rates. For adults and young adults, unemployment rates which had hit their peak in 2011, were decreasing. Teens still experienced disproportionately high unemployment, with more than one – third of teens seeking employment in 2014 unable to find work.

These statistics are drawn from the Census Bureau’s 2014 American Community Survey, which includes estimates on demographics including age, gender, race, and household characteristics, as well as economic and housing conditions.

The Census 2014 data are now up-to-date and readily available on Keeping Track Online – where you can explore these indicators and more on a citywide, borough or community district level through user-friendly maps, charts and tables.