Snapshot of NYC Children and Families in 2014: Statistics from the US Census Bureau’s American Community Survey 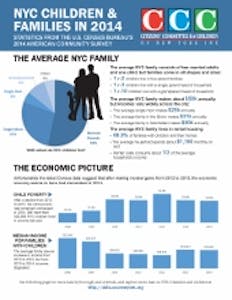 CCC has created a Snapshot of NYC Children and Families in 2014 including an infographic and data table by borough that shows key data elements from the 2014 United States Census American Community Survey.

The latest data released by the U.S. Census Bureau in late September reveal that signs of economic recovery seen in 2013 seem to have lost momentum in 2014.

One in three NYC children continue to live in poverty.

The cost of living in NYC continued to increase.

These statistics are drawn from the Census Bureau’s 2014 American Community Survey, which includes estimates on demographics including age, gender, race, and household characteristics, as well as economic and housing conditions.

Download the snapshot for a thorough analysis of the data.