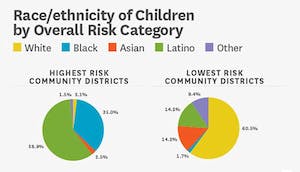 The child population in New York City is the largest and among the most diverse in the United States. Of the 1.8 million kids who call the city home, 35% are Latino, 26% are white, 23% are black and 12% are Asian.

But when it comes to children growing up in neighborhoods with the highest risk to overall well-being, black and Latino children are disproportionately represented.

CCC’s Community Risk Ranking released last week exposes the stark disparities faced by children throughout the city across geographic and racial/ethnic lines. The report shows that kids growing up in neighborhoods in upper Manhattan, the South Bronx and central Brooklyn face significantly more risk than children growing up in other neighborhoods in the city.

It also shows that 94% of children living in the 10 community districts ranked highest in risk are black or Latino. In many of these districts, more than half of children are growing up in poverty and around 7 out of 10 are living in single parent households. When comparing outcomes in these communities to those in the communities ranked lowest risk:

For example, one subway stop separates children on the Upper East Side of Manhattan — where the majority of children are white and less than 7% live in poverty — from East Harlem, where nearly 90% of children are black or Latino and the child poverty rate is over 48%.

“Given that black and Latino children constitute 58% of the city’s child population, their stark overrepresentation in the highest-risk communities is alarming,” said CCC Executive Director Jennifer March. “These statistics point to a need to ensure that communities with high populations of black and Latino families have adequate access to the services and supports that have proven time and again to help break the cycle of poverty and improve outcomes for children.”

CCC’s risk ranking is designed to point to areas in need of protection and expansion in the current political climate – including child care, after-school and summer programs; preventive health and mental health care in schools and communities; school and summer meal programs; expansion of tax relief such as the Earned Income Tax Credits; among others.

The report puts crucial information about New York’s children, families and communities into the hands of policy makers, services providers, philanthropists, community leaders, and New Yorkers at-large so that everyone who cares about NYC children has the facts needed to lend their voice to the youngest and most vulnerable.

Neither geography nor race should dictate children’s futures. Together we must work to ensure children of all races and ethnicities in every New York City neighborhood have access to the resources and services they need to thrive.

You can stay informed by joining our e-action network to receive regular updates on CCC’s data and opportunities to work with us to advance practical solutions to combat inequality and improve outcomes for New York’s children and families. Sign up today!