Keeping Track 2015: Our Newest Databook on Child Well-being in NYC 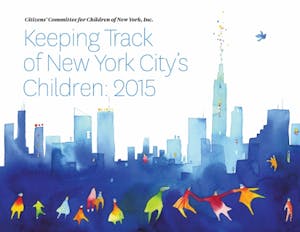 Today we released the eleventh edition of Keeping Track of New York City’s Children, our biennial databook on the well-being of New York City’s 1.8 million children. Keeping Track 2015 includes hundreds of indicators that create a picture of how children, from infancy to adolescence, are faring citywide, in each borough, and in each of the city’s 59 community districts.

For over twenty years, CCC has been collecting and compiling the most comprehensive database on the well-being of New York City’s children. The data presented in our Keeping Track publications and included in our online tool have continually provided elected officials, policy-makers, researchers, foundation and corporate program officers, and more with the facts needed to better understand the needs of the most vulnerable New Yorkers.

The data in Keeping Track 2015 show profound racial disparities among children. Black and Latino children, who make up approximately 60% of the child population, suffer disproportionately across nearly all measures of child well-being.

Keeping Track 2015 also shows persistent geographic disparities, suggesting that in the Bronx, in particular, children face multiple barriers to their well-being. All of the communities that rank as highest risk to children are located in the Bronx, with the cumulative risks being greatest in the Hunts Point community. Children in Northern Manhattan, Harlem, and North and Central Brooklyn also face significant and multiple risks to their well-being.

In its whole, the data in Keeping Track2015 paint a clear picture of the critical need to combat inequality by ensuring that all children across every New York City community have access to the opportunities and services that will keep them healthy, housed, educated, and safe.

At today’s premiere, a panel of experts from the child-serving community in New York City joined CCC’s Executive Director Jennifer March and Senior Policy Associate for Research and Data Analysis Courtney Wolf to discuss the data as well as risks and opportunities that should inform child advocacy.

The presentation from today’s premiere provides an overview of the data in Keeping Track 2015.

The new print edition of Keeping Track of New York City’s Children is available for purchase.

You can also explore the data on Keeping Track Online which allows you to create custom maps and charts to better understand the needs of children throughout the city.

Your advocacy made a difference in 2021 Insights