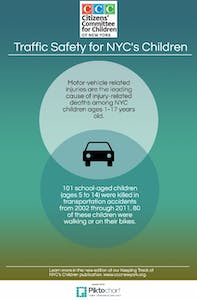 This past winter, CCC’s Associate Executive Director for Policy and Government Relations, Stephanie Gendell, was appointed to the New York City Child Fatality Review Advisory Team (CFRAT) by Public Advocate, Letitia James. CFRAT was formed in 2006 by Local Law 115 to review and report on injuries as preventable causes of death of NYC children under age 13. CRAT is a multidisciplinary committee of representatives of city agencies (such as DOHMH, ACS, the Medical Examiner’s Office and DHS) and child welfare and medical experts appointed by the Mayor, City Council Speaker and the Public Advocate’s Office.

The data reviewed by CFRAT is a stark reminder that keeping NYC’s children safe means taking a close look at traffic safety. Motor-vehicle related injury was the leading cause of injury deaths with 23 children ages 1-12 and 25 youth ages 12-17 dying from these injuries in 2009-2011. 65% of these children and youth were pedestrians.

Interestingly, when looking at the time of day, the highest percentage of motor vehicle injury deaths (32%) for children and youth ages 1-17 years old (from 2009-2011) were struck and killed between the hours of 3 PM and 8 PM—times when children and youth could have been safely in child care and after-school programs.

Keeping children and youth positively engaged during these hours literally keeps them off the streets out of harm’s way from traffic. This data is another example of why it is important to take the additional steps necessary to increase access to early education, after-school and summer programs for children of all ages.

The CFRAT report concludes with recommendations that could help all New Yorkers be safer when crossing the street—cross at crosswalks, follow traffic signals, step back from the curb, and look both ways for both cars and bicyclists. And NYC drivers should remember the speed limit is now 25 MPH unless otherwise posted and texting while driving is illegal.