Honor the Victims of the Youth Justice System Through Continued Advocacy 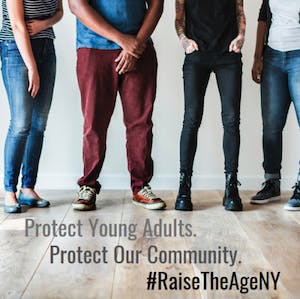 We are thinking of Kalief Browder and his family. In 2010, Kalief was detained at Rikers Island at 16 while awaiting trial. He was wrongfully accused of stealing a backpack – a charge that was eventually dropped in 2013.

For three years, Kalief as a teenager endured beatings at the hands of corrections officers and two years in solitary confinement. His mental health deteriorated and in 2015 – two years after his release – Kalief committed suicide.

It was reported last week that his family has reached a settlement with the City of New York.  NPR reported that, according to the family’s attorney, “The family is pleased that they can bring closure to this part of the matter but hopes that the national recognition that the case gave to the need of prison reform and dealing with younger individuals continues.”

Stories like Kalief Browder’s — and the vocal advocacy work of surviving family members — continue to push all of us to elevate youth justice reform. Since Kalief’s death, we have seen progress with the end of the use of solitary confinement for 16- and 17-year-olds at Rikers, the moving of incarcerated youth off Rikers, and the passage of state law to raise the age of criminal responsibility from 16 to 18.

But our youth justice advocacy is far from complete. There’s more to be done including:

To learn more, the Raise the Age-NY campaign video series sheds more light on how far we’ve come and where we must go next.

Furthermore, a key detail in Kalief Browder’s tragic story points to a broader issue: He was never convicted for the low-level offense. Yet, he spent three grueling years fighting for his release due to the backlogged criminal justice system and bail being set higher than his family could afford.

Long waits for trial are not uncommon — particularly in The Bronx, where Kalief lived. In fact, a lawsuit from 2016claimed Bronx defendants had to wait an average of 827 days before going to trial.  However, a bill named after Kalief aimed at addressing the backlog has been introduced by state lawmakers. In addition, overall bail reform has been identified as a priority by key state leaders.

We remember Kalief Browder and others who endured similar injustices because their stories will have a lasting influence on New York’s justice system and remind us of the advocacy work that lies ahead.