This blog is available in Spanish

Citizens’ Committee for Children (CCC) is an independent advocacy organization working to ensure all New York children are healthy, housed, educated, and safe. As part of our community-based project in Elmhurst/Corona, Queens, we launched a survey to gather community members’ perspectives via a cellphone-based survey (SMS text messages). This project had two main objectives: (1) complement the face-to-face conversations with community members by reaching out to others who may not be available to participate in CCC’s focus groups; and (2) test cellphones as a medium for data collection and future community outreach projects.

The survey ran from June 25th to September 11th, 2019 and gathered high-quality data from 129 respondents. Of those respondents, 124 completed the entire survey, including 71 Youth and 53 Caregivers.This means that the rate of ‘breakoffs,’ or incomplete surveys, was less than four percent, a notably low rate for an SMS survey when compared with other studies of this method. 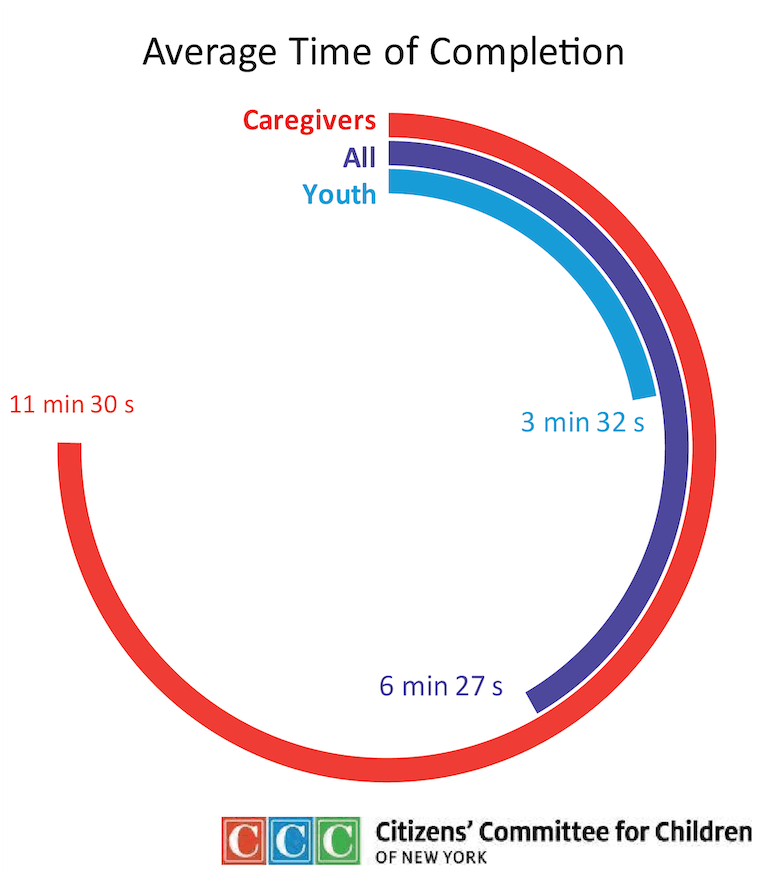 Quality Of Conditions And Services In The Community

CCC asked respondents to evaluate on a scale from 1 to 10, the quality of several conditions and services in the community: Jobs, Housing, Schools, Immigrant Services, and the Environment. Housing received the lowest average rating (5.1). However, the variation between the ratings of the five key service areas was not as large as expected; Immigrant services (i.e. education and training) received the highest average rating at 6.4, followed by Schools at 6.2 and Jobs at 6.0.

Respondents’ evaluations of these services were backed up in their responses to open-ended questions. When asked to share the biggest challenge or need facing families, respondents overwhelmingly noted housing and rent issues, followed by improving environmental quality, finding better schools, and language barriers. In terms of recommendations – the area where responses were the longest – there was a big emphasis on the cleanliness and quality of the environment, citing the need for lawmakers and the police to increase efforts to clean and monitor the safety of the streets, parks, and other public spaces. Respondents also stressed the need for the government to intervene in the housing market and stop the rise of rents. When asked to consider the best community assets available to families, respondents most frequently named parks, public transit, and the library. 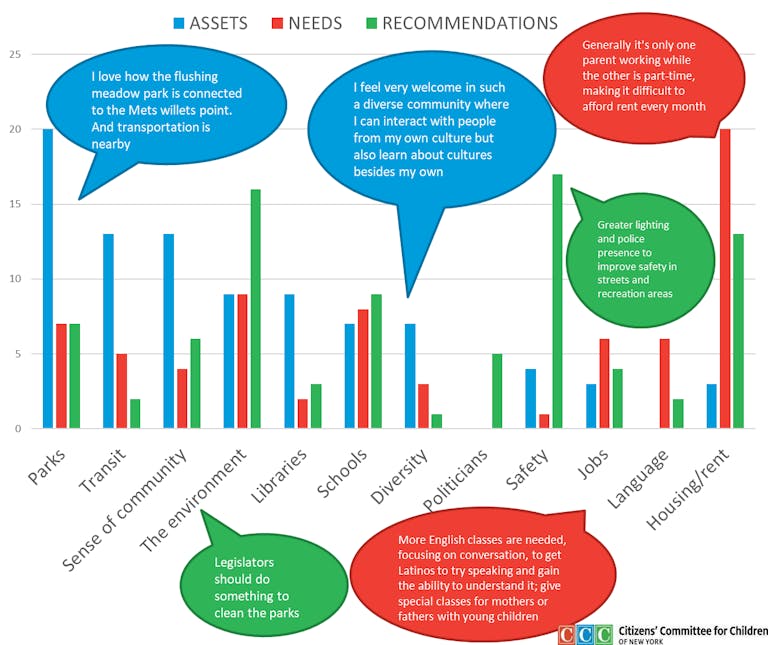 Despite noting these challenges and calling for changes, most survey respondents expressed a satisfaction with the overall neighborhood quality and confidence that the standard of living will improve for future generations. Two-thirds responded they either “Somewhat Agree” or “Strongly Agree” with the statement “My neighborhood is a good place to raise a family,” and a similar proportion (64%) agreed that their neighbors are willing to help one another. The latter finding is consistent with results from an identical question from the Department of Health’s Community Health Survey. Further, both youth and caregivers overwhelmingly agreed that in 20 years, their standard of living [or their children’s] will be better. Overall, 78% of respondents responded affirmatively to that question.

One benefit of the SMS method is the more rapid delivery of information and feedback between CCC and respondents than is typical for survey. CCC shared these results with all survey respondents in late September soon after the survey closed. The survey also offered other valuable lessons for assessing the extent to which a cellphone-based survey is a feasible tool for data collection and community outreach. Going forward, CCC hopes to use this tool as a means of information and resource sharing, campaign coordination, and further data collection efforts to advance the well-being of New York City’s families and children.