Housing Security in NYC: What the Most Recent Census Data Tell Us

Every year, the US Census Bureau releases data from the American Community Survey, an annual survey of millions of households across the country. This year CCC analyzed the 2021 estimates with a focus on housing security. Our analysis reveals how housing instability during the COVID-19 pandemic was not faced equally among New Yorkers—immigrants and Black, Asian, and Hispanic children and families were more likely to face housing insecurity compared to White families and children.

CCC’s analysis examines data from the US Census Bureau’s annual American Community Survey, with a focus on housing and demographics. Comparing data from 2019 and 2021 shows an increase in housing costs and unaffordability for low-income households. Non-citizen immigrant households are more likely to experience economic hardship due to housing costs and barriers that prevent them from earning a living wage.

households are under pressure from high housing costs

Overcrowded housing is an indicator of housing unaffordability and can negatively impact health and well-being. While the city’s rate of overcrowded rental housing is 11%, overcrowding is a larger issue for immigrant households.

CCC’s analysis compared severe rent burden (spending 50% or more of household income in rent) to the number of residential marshal evictions reported by the city from January to September 2022. 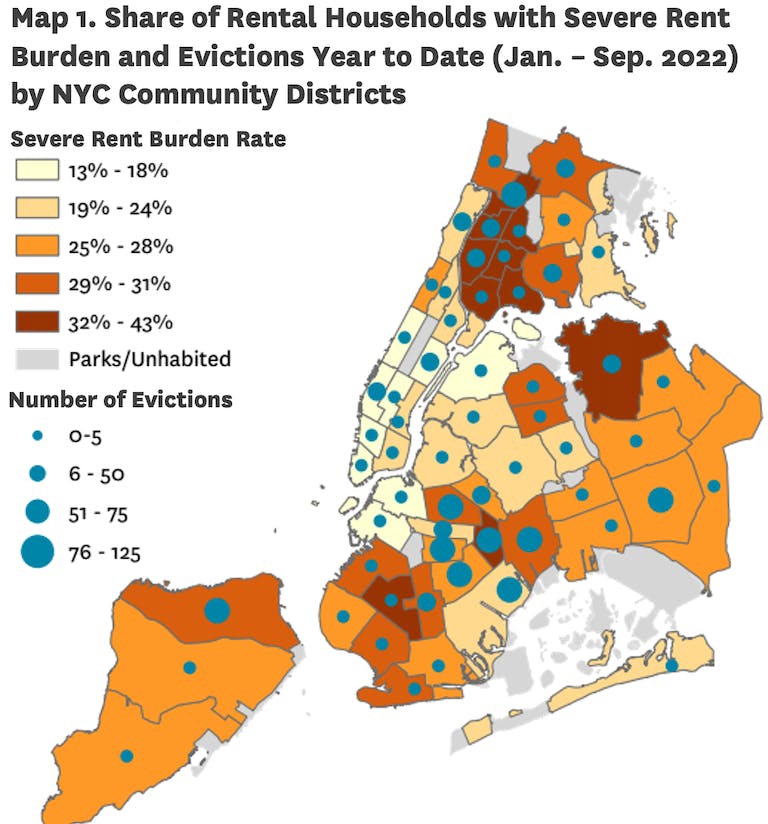 All children and families in New York City deserve to be securely housed regardless of their race/ethnicity, immigration status, or documentation status. There are several ways New York City government might change policies to improve housing security, including and especially for families with children living in the City’s homeless shelters. Right now, New York City has an illogical policy that makes homeless families wait in shelter for 90 days before they are qualified to apply for CityFHEPS rental assistance vouchers. As a result of the “90 Day Rule,” families stay in shelter for longer. In FY 2021, families spent an average of 520 days in shelter and that number has gone up to 534 days, or 17 and a half months, for FY 2022. Studies have shown that children living in shelter have worse educational outcomes and higher rates of absenteeism. But the city still refuses to take action to reform this misguided rule and alleviate their hardship. CityFHEPS vouchers are among the best tools to help homeless families move out of shelter. Abolishing the “90 Day Rule” would allow families to access rental assistance vouchers promptly and achieve permanent housing stability sooner.

City Limits: Every Level of Government Must Step Up to Address Family Homelessness News