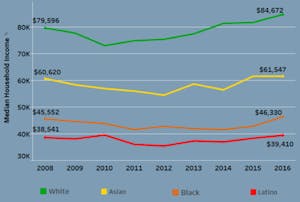 The Census Bureau’s annual release of findings from the American Community Survey – the tool used to produce official estimates of income and poverty among other important indicators – has brought good news for New York City the past two years. The 2015 survey results revealed that median household income in New York City increased 5 percent from the prior year, finally returning to near its pre-recession level (with adjustments for inflation). At the time, CCC pointed out that income for families with children was still lagging behind. That changed this past September, when results from the 2016 survey showed that median income for families with children in the city increased 10 percent from 2015, sending it over its pre-recession level.

However, it is important to consider how the Great Recession and the subsequent recovery may have increased economic inequality in the city. Of the five boroughs, only Brooklyn’s median household income was meaningfully higher in 2016 than it was in 2008, the last year of data before the recession sent incomes falling. It was the already wealthy districts of Brooklyn Heights/Fort Greene and Park Slope, and the rapidly gentrifying districts of Williamsburg/Greenpoint, Bedford Stuyvesant, and Crown Heights that contributed most to Brooklyn’s 14 percent increase in median household income. Notably, the borough’s three districts with the lowest incomes in 2008 – Coney Island, East New York, and Brownsville – did not experience statistically significant increases in income.

In Brooklyn, where we saw median income increase in some neighborhoods with large black and Latino populations including Bedford Stuyvesant and Crown Heights, it seems those gains are not being felt by everyone. While black and Latino households in Brooklyn have recovered to right around their pre-recession income levels, the median income for white and Asian households increased 30 percent and 15 percent, respectively, from 2008 to 2016.

Over the last few years, important steps have been taken to make the city more equitable through initiatives like raising the minimum wage, paid sick leave, universal prekindergarten, and free lunch for public school students. The upcoming citywide election offers a perfect opportunity to assess how the city’s children and families are faring and identify initiatives that can improve well-being moving forward. It’s clear from census data that the efforts to reduce economic inequality and promote upward mobility must not only be sustained but expanded on.

By advancing these and other priorities, subsequent census releases might not only bring good news for the city as a whole, but may finally start to show a narrowing of the income gap – and improved well-being for families with children.