Back to School: How Diverse are NYC’s Classrooms

The Mayor’s appointed School Diversity Advisory Group recently released its second report, recommending several actions the city could take to help diversify its schools. Regardless of how we get there, the evidence is clear: diverse classrooms create better outcomes, and research shows that ALL students benefit from learning environments that are BOTH racially and economically diverse.

Back to School Part 2: Do NYC Schools Represent Their Districts?
Read our latest analysis looking into whether schools represent the racial/ethnic makeup of their districts.

Read Back to School Part 2 >

Our Research & Data Team combed through the data from the 2018-2019 school year to determine the diversity of NYC schools.

Read below to check out some highlights from our findings.

How diverse are NYC’s public schools?

One common metric for defining a diverse school is when no one racial/ethnic group exceeds 50% of the student body and no two groups combined exceed 80%.

of all schools were considered racially/ethnically diverse in school year 2018-2019.

To break it down further:

of all elementary schools were diverse and only

of all middle schools and high schools.

Diverse learning environments offer many benefits to a child’s education. Yet many of the city’s Black and Latinx students remain in segregated schools.

of all schools are predominantly Black and Latinx – and this grows incrementally higher from Elementary to Middle to High School.

Representation of students in diverse schools 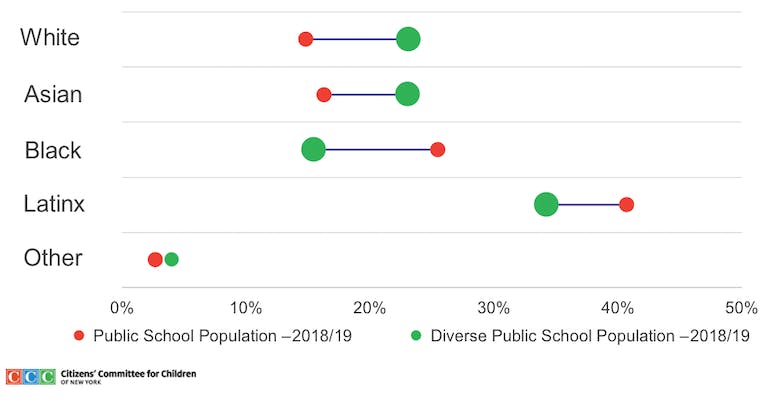 Of the 28% of schools that were considered diverse, there are substantial differences in representation when looking at the racial/ethnic makeup of their enrollment.

Economic status ranges between school districts, where low income students comprise of less than half of the student population in some districts and others serve low-income students almost exclusively.

of the entire public school population.

The average ENI for all NYC schools is

The DOE considers schools with an ENI 10 points above or below this average to be less economically diverse than the average public school. But between school districts ENI can vary even more, signaling the lack of economic diversity even at the district level in the NYC school system.

while District 9 (East Tremeont, Morris Heights) has an