A New Plan for the Homeless 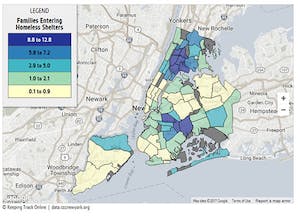 Mayor de Blasio announced on Tuesday a new strategy to combat homelessness in New York City aimed at reducing the number of individuals and families entering homeless shelters and realigning the shelter system so that homeless families can be served in their borough or community. Key elements of this plan include opening 90 new shelters across the five boroughs, while eliminating the reliance on cluster sites (units within private apartment buildings) and hotels where many homeless New Yorkers are currently being housed.

CCC supports the Mayor’s proposal to open new homeless shelters across the city so that children in particular can be housed close to their home neighborhood and the schools, services, and supports that exist there. It is imperative that the city do everything in its power to prevent more people from becoming homeless, to provide services and supports at the community level for those who become homeless, and to ensure that shelters are equipped to keep children and families housed and safe in the immediate and enhance family well-being in the long term.

Years into the recovery from the Great Recession, the number of individuals and families at homeless shelters, as well as the number of street homeless, has continued to rise with no signs of slowing down. Incomes have only now started returning to pre-recession levels (though not for everyone), and median rents have easily outpaced income growth, a major factor in the historically high rates of homelessness in the city.

As you can see in the map above, Keeping Track Online, CCC’s database of dozens of indicators looking at the well-being of children and families in New York City, shows the community districts where the largest numbers of families with children are entering homeless shelters. Six communities in the Bronx (Mott Haven, Hunts Point, Concourse/Highbridge, University Heights, East Tremont, and Morrisania) and three communities in Brooklyn (Bedford Stuyvesant, Brownsville, and East New York) have the highest rates of families entering homeless shelters, ranging from nine to 13 families out of every 1,000 households. In these communities, more than one-third of households pay more than half of their income on rent and those with the lowest incomes often pay far more. Those in unsubsidized, unassisted rentals are particularly vulnerable to the effects of rent increases, job loss, or unexpected expenses.

As the asset mapping tool on Keeping Track Online shows, there is a significant concentration of homeless shelters in the nine community districts mentioned above, with nearly 100 of the city’s over 250 shelters in those neighborhoods.

Homeless Shelters in the South Bronx

Though rates of homelessness are highest in parts of the Bronx and Brooklyn, neighborhoods all over the city contribute families to the shelter system, and homelessness appears to be on the rise in some districts. In St. George – the northernmost district of Staten Island – the number of families who entered a homeless shelter in 2014 (198) was double what it was in 2005 (99).  Williamsbridge in the northern Bronx has gone from having the 17th highest rate of families entering homeless shelters (4.0 families out of every 1,000 households), to the 10th highest in 2014 (7.2 families out of every 1,000 households).

As the Mayor made clear, every community in New York City will have to do its part to help individuals and families who have been forced from their home. A great way to start is to familiarize yourself with the data on what drives homelessness in individual communities and get a sense of what your neighbors are up against. CCC will continue to track progress on the Mayor’s strategies in the coming months to keep more people in their homes by making housing more affordable and preventing wrongful evictions, as well as improving conditions within shelters and carrying out a borough-based approach to providing shelter in New York City.