Snapshot of NYC Children and Families in 2013 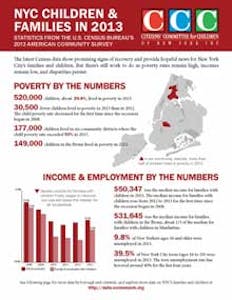 CCC has created a Snapshot of NYC Children and Families in 2013, including an infographic and data table by borough that shows key data elements from the recently-released United States Census Bureau’s American Community Survey.

The Census data show promising signs of recovery and provide some hopeful news for New York City including a slight decline in the child poverty rate leaving approximately 30,000 fewer children living in poverty in 2013 than in 2012. Moreover, the median income for families with children increased for the first time since 2008, showing signs of recovery from the recent economic recession. But there’s still work to do as poverty rates remain high, incomes remain low, and disparities persist.