Reducing stress for children and families 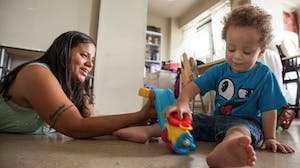 One Sunday after church, Brownsville mom Shamina Bermudez took her four children out for pizza. The pizza was too hot for her youngest, a toddler, to eat right away, and he grew increasingly agitated as he waited for it to cool down. Bermudez could see he was on the verge of a meltdown, so she crouched down to her son’s level.

“Honey, I’m so sorry,” she told him. “The pizza is too hot to eat right now. You have to wait just a little bit longer.”

In response, her son reached out for a hug. He calmed down, and waited contentedly until the pizza was ready to eat.

Bermudez was elated. She had learned that technique from Power of Two, a parent coaching program she’d graduated from just a few weeks earlier. Before entering the program, she might have responded with impatience or frustration. But the tricks she’d learned helped her stay calm, and in turn, kept her children calm as well.

“Power of Two provides a little support because parenting is hard,” says Lwiza Escobar, the Brooklyn Director of the program. “Little changes can make a huge difference.”

Our new report, From Strengths to Solutions: An Asset-Based Approach to Meeting Community Needs in Brownsville, highlights some of the challenges Brownsville parents face, including lack of formal child care options and poor conditions in many public housing units. More than a quarter of Brownsville adults do not have a high school degree and more than eighty percent of children grow up in single-parent households, adding to the immense pressure under which many parents live.

Power of Two helps alleviate that stress by offering coaching and support for parents of babies ages six months to 24 months in three key ways. They help parents learn how to nurture their children when they’re upset in ways that validate their feelings. They help parents ‘follow the lead,’ or take joy in and give full attention to what their babies are doing in a given moment. And they teach parents how to reduce frightening behavior, and understand how to build trust with their children that carries throughout their lifetime.

“The program reduces stress for both parents and children, so that they can all be happier and healthier,” Escobar says.

That’s exactly what it did for Bermudez, who now works for Power of Two as the Bronx office manager, and for Tiffany Martin, another graduate of the program who now works as a parent coach herself.

“After I finished the program, my oldest said to me, ‘You’re calm!’” she says. “My daughter became more outgoing and more secure.”

Some of the techniques the program teaches parents are relatively simple, like making sure to consciously smile more and letting children play without interrupting them.

“Little things like that makes their self-esteem better, but people don’t tell you that,” Martin says.

Martin and her fellow parent coaches spend an hour a week with the families they serve in the family’s home, and the program is free for participants. Since opening in Brownsville in October 2015, the program has served more than 200 families and is expanding throughout Brooklyn and into the Bronx.

As the program reaches more and more parents and helps them make small adjustments to their everyday behaviors, they will lay the foundation for healthy self-esteem and trusting parent-child relationships that will benefit children as they get older not only at home but also at school, in social settings, and eventually in the workplace.

“We’re helping parents realize how simple things that many times they’re already doing can shape their hopes and dreams for their child,” Escobar says.