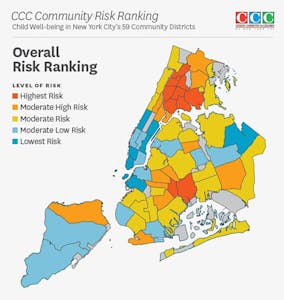 New to this year’s report is a detailed analysis of racial/ethnic inequalities, revealing the disproportionate number of black and Latino children living in neighborhoods where the greatest levels of risk concentrate. CCC’s analysis shows that 94% of children living in the highest risk communities are black or Latino. Among the 35 communities where more than half of children are black or Latino, none ranked in the lowest or moderate-low risk categories.

Armed with this data, CCC is preparing to advocate for the policies and programs that will help eliminate these disparities and ensure all children in New York City have access to the resources they need.

Some of the priorities CCC is advancing include:

And join us on February 14th for the launch of new data tools coming to Keeping Track Online that will bring the Community Risk Ranking data online and allow users to map the services, supports and infrastructure that exist within communities to address barriers to child well-being. Learn more and register to attend.