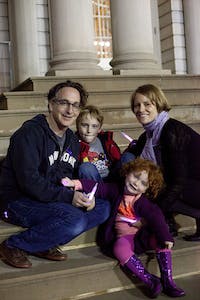 Dawn Eig has moved 18 times in her life, across four countries and five states, before finding a permanent home in New York City, her place of residence for the past twenty years. Now living in Chelsea with her husband Andy, 12-year-old son Oliver, 8-year-old daughter Lucy, and dog Frodo, she decided she wanted to make her adopted hometown a better place for children and families.

So after attending a CCC Celebration Breakfast as a guest of her friend Lizz Smith, Dawn applied to take the Community Leadership Course.  She and Lizz both took the course this year. Dawn was particularly interested in learning about juvenile justice reform, and what it will take to make the system a true beacon of justice for children. The nonprofits and social service organizations that she’s visited with the CLC this fall have given her a more nuanced understanding of the web of systems that shape the city.

“I feel like the course has been so incredibly informative and insightful on so many issues,” she said. “I think learning about the justice system in general has been really helpful to see the inefficiencies that exist.”

Trips to sites like the Center for Family Representation, an organization that provides free legal representation and social work services for parents with cases filed against them in family court, opened Dawn’s eyes to some of the concrete reforms she and her fellow advocates can join CCC in pushing for to improve the system, such as increasing resources for the family court and raising the age of criminal responsibility in New York State.

Her trip to Covenant House during the CLC’s week on homelessness and housing issues gave her further insight into the myriad struggles some youth face, in this case children without permanent, stable housing. “It is inconceivable to think of an 18 or 19-year-old child released to the world without any familial connections or support to help guide him in terms of housing, education, or employment,” she said.

She is committed to keeping a close eye on the issues she learned about in the CLC and plans to stay involved with CCC so she can advocate for policies that will move children and families forward. “I look forward to following these issues and figuring out ways to help advocate for changes that CCC identifies are needed and can be realistically attained,” she said.