Lauren Duca: An Advocate Online and Off 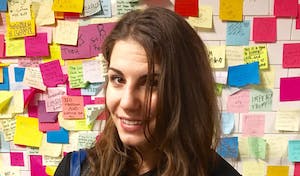 Lauren Duca, the recipient of our 2017 Vanguard Award, has no shortage of topics to cover in her weekly Teen Voguecolumn, Thigh-High Politics. She often has the opposite problem: With so much confusing and complicated news coming out of Washington, it can be hard to know where to focus.

She starts to make that decision by staying on top of each day’s news stories, even if she doesn’t think it’s a story she’ll ultimately address in her column. “I want to get a fully contextualized view of everything coming out of the White House,” she says. She reads The New York Times in print every morning and delves into the history of the issues she’s reading about so she can better build the present-day narrative for her readers.

She also pays attention to what she is sharing with her 330,000+ Twitter followers to get a sense of what is resonating most deeply with her. “If I’ve sent a ton of tweets about a particular topic, I realize that is what’s moving me that week,” she says.

At just 26 years old, Lauren has had two viral moments in the past year alone. After the election, she wrote a piece that garnered nearly 1.3 million hits, making it the most-read article in Teen Vogue history. Two weeks after that piece came out, she appeared on Fox’s Tucker Carlson show, where she fought back against his patronizing and inaccurate attacks.

Thanks to her fearless dedication to elevating the truth in the face of relentless attacks, Lauren’s writing has become necessary reading for countless teens and adults across the country looking to make sense of what is happening in the country.

Her columns lay out for readers the forces at work behind the headlines, provide further reading for additional context and perspective, and list out tangible steps people who feel compelled to act can take to make their voices heard. Tweet by tweet and column by column, she is teaching a new generation the timeless American tradition of advocating for a better world.

Lauren acknowledges that a single voice won’t change things by itself. But, she says, “Politics affects every aspect of daily living. We each have to rethink what it means to be an engaged citizen and be part of the sea change happening right now where people are constantly informed, constantly in touch with their representatives, and constantly thinking about where they can donate their time or money. It takes every single person standing up together for a cultural shift to happen, and it’s crucial to be a part of it.”

Lauren gets no shortage of pushback from people who would prefer she stay silent. But her role in the advocacy movement is larger than a single column or Twitter presence, and that knowledge keeps her going even when it feels like she is getting slammed by “a tidal wave of hate.”

“What is the point of being a writer if not to give someone access to a new idea that they can carry with them?” she says.

In fact, it was another female writer that gave Lauren access to the feminist ideals that drive her today. She credits Jessica Valenti’s Full Frontal Feminism, which she read as a junior in college, with introducing her to feminism and fueling her desire to help build a more equitable society.

“I shared that story at an event I was speaking at recently, and another college student came up to me afterwards and told me that’s what I did for her,” Lauren says. “That’s thrilling to me.”

Lauren’s goal now, in addition to her regular analysis of current events, is to empower more young people to speak their truth. She hopes that her work is helping to break down the alienation young women in particular feel in public spaces and move society to a place where women telling their stories publicly is normal.

She knows firsthand how intimidating personal storytelling to the public can be, especially online where toxicity can so easily manifest. Earlier in the year, she was harassed by disgraced former pharmaceutical executive Martin Shkreli on Twitter until he was banned from the platform for his behavior. She receives numerous death and rape threats in her email inbox every day, and people all across the country who disagree with her have taken it upon themselves to try to bully her into silence.