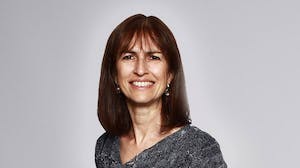 Heidi Stamas, who will receive the Eleanor Roosevelt Award at CCC’s upcoming Breakfast, is driven by a fundamental truth: “Children are innocent people who by accident of birth are lucky or not.” That knowledge, paired with the notion that the kids who are not so lucky need help from those in a position to bolster them, drove her to pursue a master’s in social work 25 years ago, and has kept her steadfastly dedicated to child advocacy ever since.

After earning an MBA and working in the corporate world for several years, Heidi went back to school for an MSW and became especially interested in public policy during the program. She gave birth to her first child two weeks after graduation, but was still eager to get involved in child welfare issues. Two different people – the dean at Columbia and a good friend – told her that CCC deployed volunteers in a productive way. So she reached out to get involved, and over the past 22 years has been a highly active CCC volunteer and Community Leadership Course site leader and has held multiple leadership roles on the board, including President and Chair.

Heidi got her start with CCC studying why children stayed in psychiatric facilities for too long. She then took the Community Leadership Course (CLC), which she said opened her eyes “to the nature of the issues and problems facing New York City’s children, and also to the dedicated, terrific professionals in the direct service community.” The CLC really underscored the importance of advocating for those who don’t have a voice, and the service providers she’s met over the years have reinforced the importance of CCC’s fact-based advocacy in helping providers make the best impact they can in their agencies.

The CLC also exposed Heidi to New York City outside of Manhattan and connected her to the many backgrounds and perspectives that CLC participants and direct service providers bring to the table. She has chosen to continue as a site leader all these years because, she says, “I find it is the best way to see what is really going on.  Last month I enjoyed our visit to East New York Farms both to learn about the work going on there, but also to see and learn about the neighborhood and its challenges.”

While she was earning her MSW and participating in clinical field work, she saw firsthand the interconnectedness of issues that affect children’s well-being. CCC’s multi-issue approach appealed to her for that reason. She encouraged her daughter, who also took an interest in children and politics, to take the Youth Community Leadership Course so she, too, could gain exposure to people and situations unlike her own and develop a more nuanced understanding of child advocacy. “My daughter went on to earn a certificate in Child Policy Research in college and is now working on the education policy team at a research institute in Washington D.C.  Maybe CCC set her on that path!” Heidi says.

When Heidi looks back on her years at CCC, she sees nothing but admiration and gratitude for the fellow volunteers, board members, staff, and service providers she has worked alongside. “It has never occurred to me to wander,” she says. “Perhaps this is because I am always learning at CCC. There are always new issues to learn about and advocate for, and old issues that still need our attention.  You feel the need to get the job done. And I feel lucky to be a small part of such a respected, effective organization. Our Community Leadership courses and our Keeping Track of New York City’s Children database are unique endeavors and ones that I feel so proud to be at all associated with.”

Although there are inevitably difficult days when advocating for children in need – Heidi recalls visiting the infamous former juvenile detention center Spofford as particularly disturbing – they re-ground her in the people she is advocating for and are far outnumbered by inspiring site visits and CCC special event speakers like Judge Corriero, Nick Kristof or Bryan Stevenson. And she draws constant inspiration from advocates in the generation ahead of her, like Betty Wolff, Fran Levenson, Sam Peabody, Marge Scheuer and Katie Lobach. “They are as dedicated and brilliant as ever,” she says. “I am inspired by them and feel fortunate to be around them.”

Heidi remains both deeply proud of the work CCC has done to make a difference for hardworking families, such as advocating for the Earned Income Tax Credit and expanding access to healthy food, and committed to advocating for programs such as child savings accounts that can help to level the playing field for children. And when she talks to people about CCC, she makes sure to tell them that their voices, no matter what form they take, will make a difference for kids.

“I stress the importance of the citizen activist in making change and describe CCC as a place to become a well-informed citizen who can then take action,” she says. For people who have the time and inclination, she encourages them to attend policy briefings, rally at City Hall and in Albany, take the CLC, and provide financial support if they are able. “If a policy or budget is changed for the better based on CCC’s data driven recommendations, then tens of thousands of children’s lives are enhanced,” she says. For people whose time is limited, she emphasizes that quicker efforts such as using available technology to respond to an e-advocacy effort really matter and will positively impact New York City’s most vulnerable children.

Looking ahead, Heidi is ready and eager to continue learning and making an impact with CCC. “One of the great benefits of involvement is being around our professional staff and learning from them,” she says.  “They are so well respected in the community and are the “go-to” people for data, advice and coalition building.  It is really a privilege to have the unique ‘professional/volunteer’ partnership that exists at CCC.”