Every September, the Census Bureau releases annual data from the American Community Survey, a survey of millions of households across the country. In this year’s Census Factsheet, CCC is highlighting data on single parents in New York City. 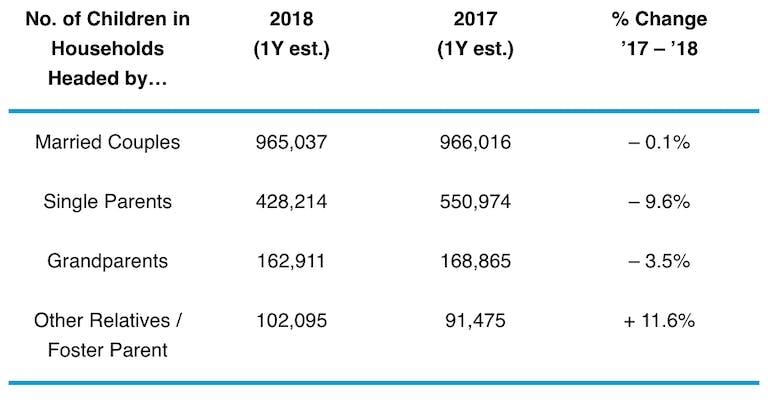 In 2018, the estimate of children in single parent households saw a 10% year-over-year decline, continuing a recent trend. Still, single parents are the second most common household head in New York City, responsible for over 425,000 children.

The economic insecurity faced by single parents and their children is widespread, and compounded by inequalities across neighborhood, gender, and race.

Conversely, some neighborhoods have more children in single parent households but relatively lower (35% or less) poverty rates for those children: this is the case in Jamaica/St. Alban’s in Queens, Canarsie in Brooklyn, and Throgs Neck in the Bronx. These geographic trends suggest neighborhood conditions and household structure should be examined together to understand the landscape of child poverty.

Single Parents In The Labor Force
Consistent with trends observed nationally, New York’s single parents are increasingly likely to be in the labor force and employed. From 2013 to 2017, the share of single parents aged 16 and older at work or looking for work (LFP rate) increased seven percentage points. During the same time, the unemployment rate fell to 16 percent.

Despite positive trends in employment, deep inequalities persist. While married couples may benefit from two potential income-earners providing for their children, single parents are often supporting kids on their own.

Racial/Ethnic Disparities By Household Type
This results in profound disparities in poverty rates depending on if a child is living in a home headed by a single mother, a single father, or a married couple.

The difference is greatest among Black and Latinx families, where child poverty is

This is roughly a 1/3 of that for Black and Latinx children of married couples.

Note: CCC uses the term Latinx for individuals identifying as Latino or Hispanic 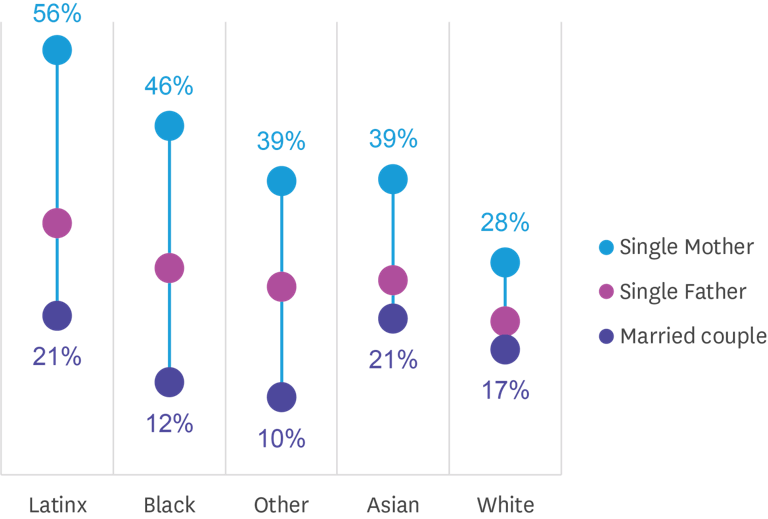 The gap is smallest across White families and stands out even more because of the stark income disparity across race/ethnicity.