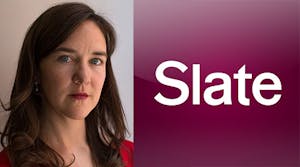 “I want to publish ambitious pieces that change the way people think and talk about the world.”

Julia Turner is the first woman to be Editor-in-Chief of Slate Magazine, having previously served as deputy editor and culture editor. Slate, one of the first online publications, celebrated its 20th anniversary this year, and digital innovation remains at the core of its mission. Its goal is to change minds with a zestful spirit of open inquiry, and its work—read by thought leaders around the globe—consistently launches some of the smartest conversations online and moves the needle in debates about public policy and culture. Julia recently described how Slate manages to stay in the digital vanguard, saying: “All work online is change, but readers are still looking for distinctive insights that help them make sense of the world. The key for Slate is remaining true to our core principles while adapting to a new digital landscape each day.”

In particular, Slate’s coverage of children’s issues has flourished under Julia’s leadership. The magazine features unusually sane coverage of parenting and childhood development, and it keeps up a regular drumbeat on early education and education issues, the latter in partnership with the Teacher Project at the Columbia School of Journalism. This spring, Slate published “Tomorrow’s Test,” an ambitious year-long exploration of diversity in eleven American public schools from Anchorage to New Orleans. Another recent piece, on the imperiled funding of New York City’s Summer Youth Employment Program from an LGBTQ perspective, included an interview with one of CCC’s YouthAction NYC students. Slate brings these issues to a wide and diverse audience and adds a unique and provocative voice to the public discourse. Julia is also a regular on Slate’s Culture Gabfest podcast and graduated with a BA in History from Brown University in 2000.