Breakfast Spotlight: Benjamin Lear, Director of ‘They Call Us Monsters’ 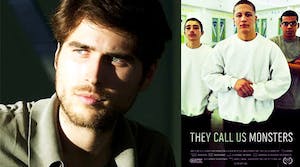 “The situation that they’re in is so overwhelming. To be looking at the possibility of never getting to live your life, at an age when you don’t know what it means to live your life in the first place.”

Ben Lear will receive the Samuel P. Peabody Award at CCC’s 2016 Celebration Breakfast on October 26th. Lear, 27, is a producer and director of the award-winning new documentary, They Call Us Monsters, which follows three young offenders in the Compound, a maximum security facility that houses Los Angeles’ most violent juvenile offenders. All three youth are between the ages of 14 and 16 and face adult sentences. The film humanizes a particularly complicated issue and asks difficult questions about America’s juvenile justice system and how we treat our youth.

“When I first entered the Compound in early 2013, I expected to find stocky, steely-eyed gangsters staring me down, wishing to jump me if given the chance. Either I’d forgotten how young teenagers really look, or I’d watched too much Locked Up Raw, but I couldn’t have been more wrong. Instead I met a classroom full of kids, giddy and eager to tell their stories. They went around the room and shared their career goals. Sixteen-year old Martin said, “I might want to be an architect. Or an artist. There are so many things I don’t even know about yet. But I’m excited to learn!” Then he paused and added, “I just hope I get the chance.” He faced 100 years to life for first-degree murder.”

Ben is a juvenile justice advocate and sits on the Advisory Boards of Los Angeles’ Anti-Recidivism Coalition, which advocates for fair juvenile justice policies and provides support to the formerly incarcerated; and InsideOUT Writers, which works to reduce juvenile recidivism by using creative writing as a catalyst for transformation. He teaches writing in the Compound and mentors former juvenile offenders upon reentry.

“I couldn’t stop thinking about this world I’d stumbled into. The narrow space between a lost childhood and a stolen adulthood where these kids managed to live, laugh and discover their potential. When I learned about an upcoming California Senate Bill that would provide them the opportunity for a second chance, I knew I had a film to make.”

Lear is a second generation producer and activist who graduated from NYU in 2010 with a degree in music composition. Previous to They Call Us Monsters, Lear wrote and performed his folk-opera, Lillian, about a man who travels to the great pacific garbage patch to reclaim all he’s lost, with a 20-piece orchestra and light show. Upon the album’s release, he partnered with Plastic Pollution Coalition and 5Gyres to raise awareness for plastic pollution. This work has led Lear to performances at TED and the United Nations.

Learn more about Ben Lear and They Call Us Monsters: