A Livable City for Every NYC Child: Building Neighborhoods from the Ground Up 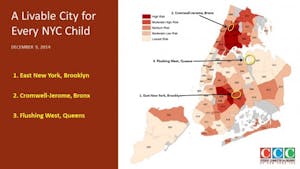 There are 2 million children in New York City, the largest population of children of any city in the country. CCC’s primary goal is to ensure that each of them have access to the supports, services and opportunities needed to set them on the path to a bright future. One important part of this work is ensuring that all NYC communities are equipped with not only the basic resources but a community infrastructure that helps children grow, learn and thrive.

On December 9, we held our A Livable City for Every NYC Child policy briefing with City Planning Chairman Carl Weisbrod, where we had the opportunity to learn more about the city’s current neighborhood revitalization efforts designed to address these needs.

Research has shown that there are many factors that are interrelated in meeting the needs of children, and that the presence or absence of access to basic necessities can have a profound impact on outcomes. That’s why our Keeping Track database is an important tool to identify areas across the city where greater attention must be paid to improve child well-being.

The map above illustrates where risks to child well-being cluster based on our data and also highlights the three communities that have been announced to date as part of the city’s community development work: East New York in Brooklyn, an area called Cromwell-Jerome in the Bronx, and most recently Flushing West in Queens.

According to Chairman Weisbrod, the common element between these three neighborhoods, and future neighborhoods that will be identified for development, is that they are areas where increased housing production will enhance the community. In East New York, for example, where data show residents face high unemployment, low median income, poor housing conditions and many households using Food Stamps, the goals include building new and affordable housing, increasing access to fresh food retail, enhancing the physical environment, and creating jobs and access to job centers.

When asked about the ultimate goal driving the neighborhood revitalization efforts, Chairman Weisbrod said, “The key to what we in city government believe is that we have to plan the city from the ground up, not the top down. At City Planning, that is to say we are doing it on a neighborhood basis. We do not believe that one size fits all. There’s a common theme in what we do and that theme is equity – to deal with the inequities that this city and really every city around the world faces – and to address those inequities the best we can.”

The data in Keeping Track illustrates the distinct needs in each of the neighborhoods, making a clear case for the community-by-community approach that the city administration is undertaking.

For example, Cromwell-Jerome (a neighborhood between the community districts of Grand Concourse and Highbridge) is in a high-need area where approximately half of children live in poverty, more than two thirds of households receive food stamps, and approximately half reside in fair to poor housing stock. Chairman Weisbrod referred to the area as a “neighborhood in formation” that is currently made up mostly of auto repair stations and parking lots built in the early part of the century to serve the residents of Grand Concourse.

On the other hand, residents in Flushing benefit from greater economic stability compared to other parts of the city — there is lower child poverty (18 % of children live in poverty), better housing conditions (11 % in poor condition), and less food insecurity (15 % of residents receive food stamps). The western part of Flushing is an area ripe for development as efforts are made to reduce pollution in and around Flushing Bay and expand on the existing community of Downtown Flushing.

We will continue to track progress on these and other neighborhood revitalization efforts as news is announced, and we encourage you to do the same. You can learn more about the needs of children across New York City’s communities by exploring the data for yourselves on Keeping Track Online.