10 Facts About NYC Children and The Census

Census data are critical to answer a key question at the center of our advocacy efforts, “Who are New York City’s children?”

For more than 30 years, CCC’s Keeping Track of New York City’s Children data book has drawn on government data sources, including from the decennial Census, to provide an answer to that question.

And while we know that Census data are used for many purposes, including the allocation of funding for federal programs designed to aid the well-being of children, families, and communities at large, we also know that hundreds of thousands of children live in households at risk of being missed in the Census count that is underway right now 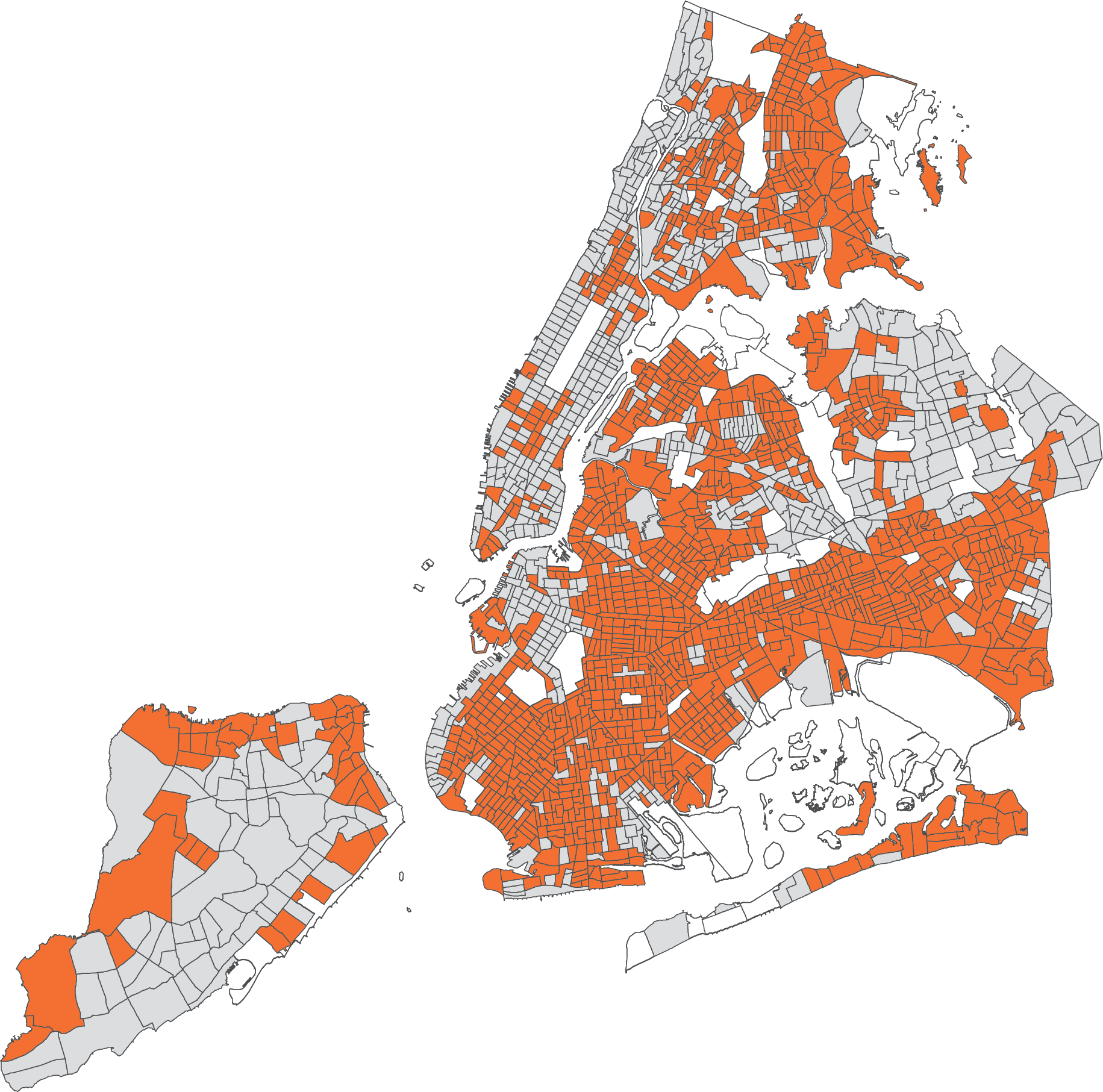 Hard to Count Census Tracts are determined by the mail return rates from the 2010 Census. Tracts that were among the bottom 20% across the country are considered Hard to Count.

In NYC, this represents 60% of all Census tracts.

NYC children were missed in the 2010 Census

Of the five boroughs in NYC, Brooklyn and Queens had the most severe undercount of young children in 2010 at -11.4% and -13% respectively. This is consistent with research which indicates that counties with larger populations often have larger undercount rates for children.

of NYC’s children are growing up in “complex” households

Examples of a complex household include a household headed by a single parent, grandparent or other guardian. Children who live in complex households are more likely to be missed on the Census for a variety of reasons, including misinformation and confusion. Learn more at our 2020 Census Resource Page.

You can access CCC’s Census Resource Library to learn how to help parents and families complete their Census and include their young child.

Immigrant families may not fill out the Census form due to language barriers or concerns about a lack of privacy and government targeting.

Did You Know? Title 13 of the United States Code is the strongest privacy guarantee in the country that requires all Census data to be private and protected. Data collected through the Census cannot be used against any person by any government agency or court. Census Bureau employees, who take this oath for life, can spend up to 5 years in jail or pay a fine as large as $250,000 if they violate this oath.

There are more than

Children under 5 are the single demographic group most likely to be undercounted throughout the country. In fact, since the 1980 Census, the undercount of young children has only worsened.

children under 5 live in low-income households

An accurate count of children under 5 in the Census will ensure that New York State receives its fair share of funding to support programs vital to the well-being of children in families experiencing financial instability. Four federal assistance programs — Head Start, WIC, the Child Care and Development Block Grant, and the Maternal and Child Health Services Block Grant — distribute $20 billion annually to states and localities based, at least in part, on Census counts of the population under 5.

children under 5 live in households with no internet

Now more than ever, internet access is essential to a complete and accurate Census count. With in-person field operations currently suspended, digital equity must be at the forefront of outreach.

children under 5 lived at a different address one year ago

Renters and highly mobile people are at risk of being missed in the Census. Housing instability many times intersects with other factors, such as income and race/ethnicity, that compound the risk of an undercount.

children under 5 live in households with seven or more people

Many children aren’t counted because their parents or guardians are confused over whether to include them on the Census form. Research by the Count All Kids Campaign found that 10% of families would leave their own young children off the Census, and 8% are unsure whether or not to count them. Because people filling out the form are unsure about including children, we could count every adult in a community and still miss many children.

The Census Bureau offers support in up to 59 languagesfor the Census. You can also call these Census hotlines for support in your preferred language.

The 2020 Census is here: You can be the greatest advocate for a young child, family, or community and ensure that we count all children in the 2020 Census. An undercount in the 2020 Census would jeopardizes critical resources for programs supporting nutrition, childcare, education, health care, housing, and others that are essential in the city’s efforts to promote positive health and development outcomes for all children. Given the concerns around access to health care and human service supports that are front and center due to COVID-19, now is an important time to ensure that every New Yorker has information about the importance of completing the Census.

How Can You Take Action Today?